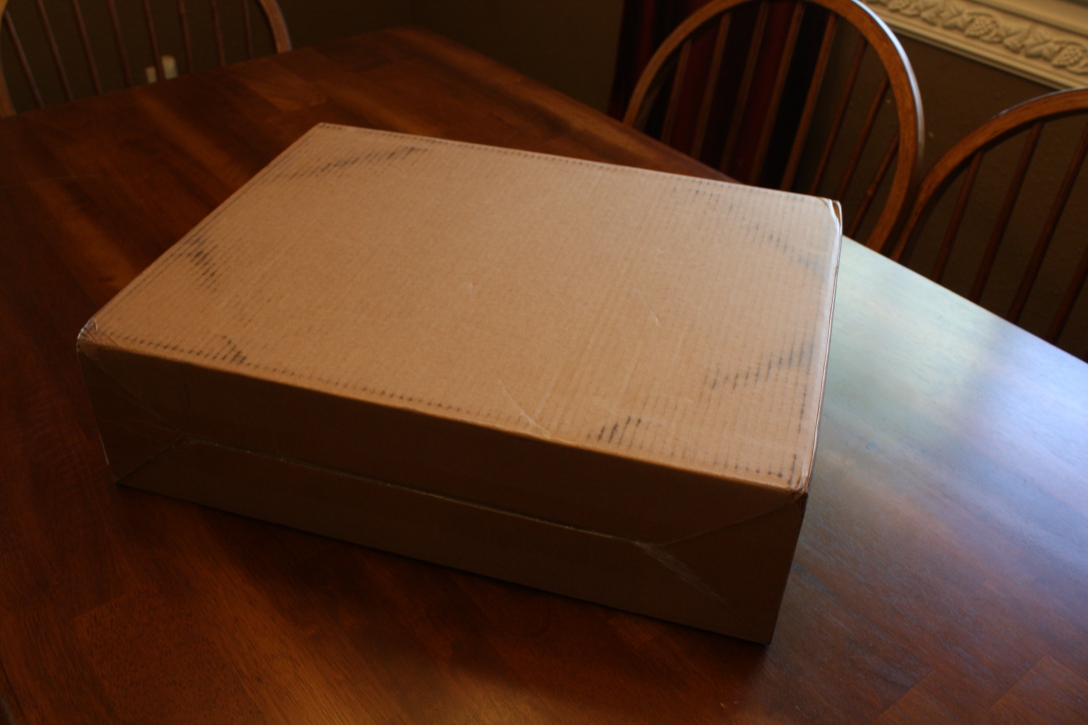 The writing prompt for this story was “whatever you do, don’t open the box.”

“Don’t open this,” he told me, setting a small cardboard box on the table and giving me a pointed look. “I mean it.”

I stared at him over the rim of my coffee mug, mid-sip.

“Just don’t.” He leaned over the table to press a kiss to my forehead. “Love you,” he called over his shoulder, heading out the door.

“Love you,” I murmured, my mug still hovering next to my mouth, my eyes fixed on the box he had left behind.

It sat quietly as I cleared away the breakfast dishes and put a roast in the oven for dinner. I idly drummed my fingers on the table, staring at it.

“What am I supposed to do with you then?”

But it didn’t answer. With a sigh, I snatched my phone and sent him a quick text, hoping to catch him walking into the office from his car.

I gingerly picked it up, surprised by how light it was, and relocated it into the cabinet in the living room next to a stack of photo albums. I filled its place on the table with folders and over-flowing binders, a sea of papers speckled with bright sticky notes. I was trying to pick flower arrangements for the museum opening next month, but all I could think about was that box. Why would he tell me not to open it? I couldn’t think of anything he wouldn’t want me to see. I slammed down the list of flower samples I’d been staring at sightlessly and glared at the TV cabinet, grabbing my phone again.

Are you going to tell me what’s inside?

It was too small to be the shoes I wanted and too big to be jewelry, besides it was way too light for anything like that. This was going to drive me insane. I decided on red carnations and had moved on to silent auction details when my phone went off.

I set it aside and made myself focus. It was just a box, but it nagged at me like an itch I couldn’t reach, my brain determined to deduce what was inside. When I unfurled my yoga mat several hours later, it was still there, staring at me through the glass doors as I dove into downward dog and tried unsuccessfully to center my errant thoughts, still focused on what could be in that box. I had just reached a halfway meditative state, convincing myself that it must be tickets to the show we had been wanting to see, when my phone rang loudly. The caterers with yet another menu plan. I paced angrily in the living room, arguing with them that soup was not finger food.

“Remind me never to use them again,” I snapped at the box as I angrily hung up.

It stared passively back, taunting me. I snatched it out of the cabinet and set it on the coffee table, lowering myself onto the couch and staring at it. It wasn’t taped. I could open it without him knowing and then put it back and act surprised when he showed me the tickets. It had to be tickets… but who put tickets in a box?! He’d never be the wiser, but he’d told me not to. I shoved it back into the cabinet and tried to push it from my mind, turning back to the museum opening and my half-eaten sandwich.

I had just finished calling prospective donors for the auction when my phone pinged.

I made roast. It’ll be ready when u get home.

I set him a kissy face emoji before putting my papers away. I wasn’t surprised. He’d been working late more nights than not. I turned down the heat on the oven and collapsed onto the couch to revise the floor plans. The box was still there. If it were a gift, he would have hidden it. Unless he was afraid I’d find it and open it accidentally. But then why not take it to work with him? I grabbed my phone again.

He didn’t answer. I finished the floor plans, folded the laundry, and revised the invoice for the museum. I finally set work aside, tired of waiting for him. My phone pinged.

I glared at the box still sitting quietly in the cabinet. He could be home anytime between now and midnight, and I was sick of waiting. I settled cross-legged on the floor, the box on my lap, and unwove the cardboard flaps, careful not to bend them.

It was empty. That only confused me more! Why would he not want me to open an empty box?! I almost texted him, but he was already overwhelmed with work, and then I’d be admitting I’d done what he told me not to. After all day of imagining the exciting things it might contain, I felt as empty as the box. This was what he got me? Nothing? I hurriedly folded it closed and crammed it back into the cabinet, trying to ignore the tug of hurt, intensified by an empty house.

I was watching TV when I heard his car pull up outside, and headlights flashed across the living room ceiling. He trudged inside, dropping his bag on the floor and collapsing into a chair at the table.

“Long day?” I set a steaming plate in front of him that I’d been keeping warm for the past hour.

He nodded tiredly. We ate in silence cut only by the sound of silverware on china and his occasional yawn. We had still barely spoken when we cleared the dishes away, him putting them in the dishwasher while I maneuvered the last of the roast into a glass dish.

“I put your box in the cabinet,” I said, stuffing a wet towel back over the oven handle.

He eyed me for a minute, his wet hands resting on the edge of the sink.

“Because I knew you wouldn’t be able to resist looking.”

I gaped at him, speechless. He laughed, looping his arms around me and tugging me against him.

“Drove you crazy, didn’t it? You’re too curious for your own good. Schrodinger would’ve hated you.”

“I can’t be here to tease you. I didn’t want you to forget about me.”

I couldn’t deny it had worked; I’d been thinking about him all day and texting him more than usual, even if it was to bug him about a box. Normally, I was so engrossed in work I barely noticed how late he came home.

“I was starting to wonder who the man in all these framed pictures was,” I said, smiling ruefully at him.

He smiled back tiredly, and for the first time I noticed the dark circles under his eyes.

“They want me to come in this weekend.”

He kissed my cheek and trudged into the living room, collapsing on the couch with a sigh and throwing his feet up on the coffee table, his head sagging back onto the cushions. I glanced over at his cellphone sitting on the table. I snagged it and ducked back into the kitchen.

“You want a drink?” I yelled into the other room, scrolling through his texts.

“Wine sounds good,” I responded absently, finally locating her texts right under mine.

I typed out a hasty message before joining him on the couch, tossing him his phone and grabbing the remote.

“You forgot your wine,” he laughed.

“I can’t, babe,” he said apologetically. “I work in the morning.”

He stared at me.

“I mean, it’s not a surprise after all those long hours at the office. That wreaks havoc on the immune system. I’m thinking the flu, but I’m open to suggestions.”

His phone went off, and he stared at the message that had popped up on the screen.

“You texted my boss?”

I watched him nervously as he stared at the text, but he wrapped an arm around my shoulders and buried his face in my hair.

“So, what will it be? Something new or just Jurassic Park for the fiftieth time.”

We curled up on the couch, and he fell asleep with his cheek on my hair before the dinosaurs even showed up. A sliver of cardboard peeked out of the cabinet at me, and I wrapped my arms around him, pulling him a little closer. I was wrong about that box. Sometimes nothing is the best gift you can give.

One of my favorite things to write is relationships between happy, loving couples. It just gets me. I hope you enjoyed this story as much as I loved writing it.